Hey guys! Sorry for the delay. Full plate but without further ado…here’s my rundown of Opening Day at Nationals Park:

In Rizzo We Trust! The energy for the day started with the early morning announcement hit that our GM Mike Rizzo would be sticking around for another two years.

I arrived at the park around 11:15a, not long after the gates opened and the lines were long as f*ck. The Season Ticket Holder line…you know the line with the red carpet that I should’ve taken…was super long so I opted for a shorter elsewhere. I got in, grabbed my Geico sponsored t-shirt featuring this year’s game schedule, and relished in the fact that baseball is officially back! There were things going on at every corner of the ballpark. DJs Flexx and Chris Styles were indeed spinning on the 1s and 2s which totally added to the hype of the day. The energy was live…red was EVERYWHERE! There were a few Mets fans sprinkled in but it was clearly our ballpark. You know…I love Opening Day for many reasons but the number of adults opting out of work and opting their children out of school for the experience just warmed my heart. 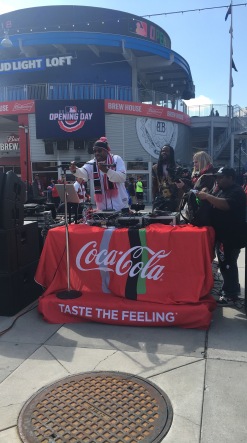 The fanatic that I am…I headed right to the Team Store to checkout what was new. That place is always a problem. However, this time I was prepared with budgeted cash (best way to stay on track with your financial goals IMO). But OMG! I was able to pick up what I feel is the perfect abbreviated version of my Nationals Hershel Supply Co backpack…THE HIP PACK!!! That thing had been sold out for most of the MLB teams online for a while now but the team store had it!!! I also picked up an Opening Series lapel pin for my lanyard and a pink toddler-grade bat/ball set for my bestie’s little girl…you have to start them early 🙂 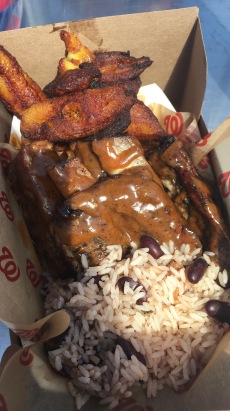 After the team store, my next stop was food because…although I enjoy and appreciate the socialization around the game…I do go to watch the game. So once I get to my seat…I usually don’t get up again. I’m that person.

Jammin Island BBQ! Man…the jerk chicken and ribs combo was SO good! Warning…it’s a lot of food but this is probably the best value in the park. For $17, you get jerk ribs, jerk chicken, and your choice of two sides. You can choose between plantains, rice and beans, coleslaw, and fried yucca. My recommendation: GET IT! But ask for extra jerk sauce and enjoy! Locations: Section 141 and Red Loft 244

Awards were on deck:

Heart-warming special guests were there too:

Did I mention how dynamic the game of baseball is?

We started off good. Stras did Stras things. We had a 1-run lead…and then entered Jay Bruce. To speed things up a bit…Stras balked, Eaton left early on a minor injury sliding into home, the home base ump was on some bs (that whole crew can kick rocks btw), Trea was ejected (1st career), Cespedes homered on a 95 mph fast ball (gotta give credit), we loaded the bases but came up empty, Stras would end after 6 innings, and the Mets went on to earn a grand slam on Kintzler. That energy I spoke of earlier? Yeah…that faded and the reality of a loss on Opening Day and the fact that I had been outside in 42° weather hit…HARD.

Two hours and 57 minutes with 42,477 in attendance…we lost 8-2 and dropped to 3rd in the NL East behind the Braves and the Mets. 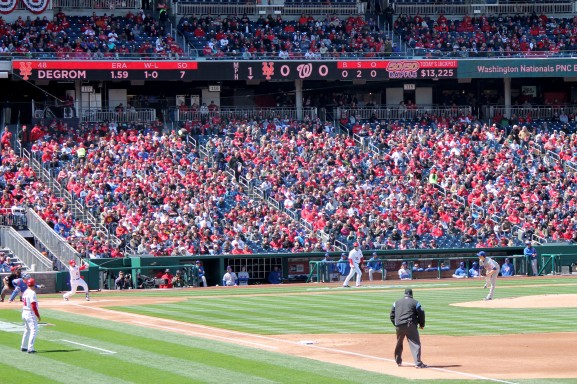 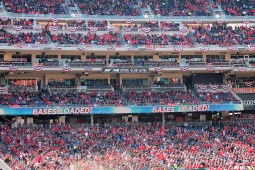 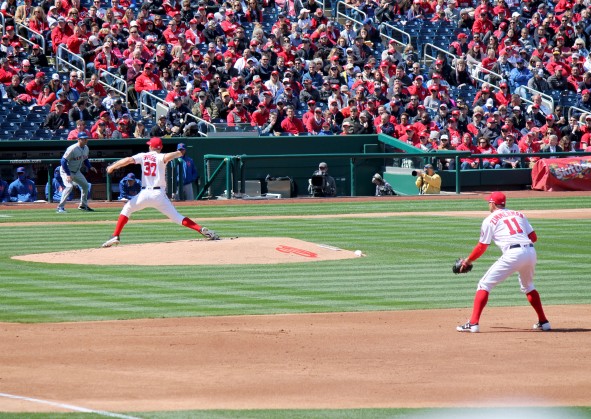 Although the Nats were never able to catch up…

I was able to catch up with Stephen! (See what I did there? lol) Stephen and I met last year at the Nationals Crab Feast and made it a point to stay in touch. We were passing ships during Spring Training but met up on Opening Day for a brief chat and of course…a pic! 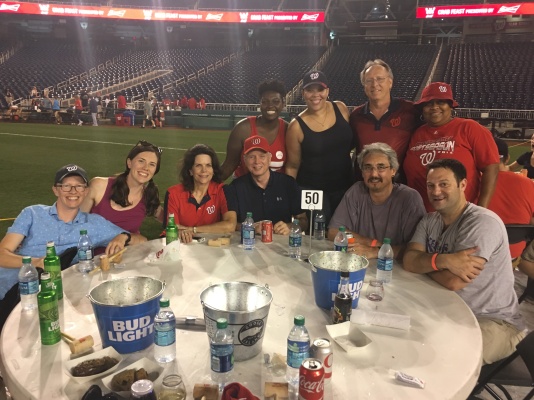 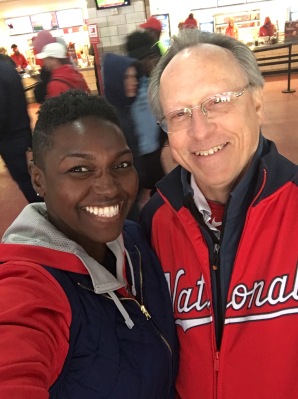 Despite the loss(es) it was still a good day for baseball. It’s still early in the season. We have a long way to go but I’m excited to see how the season unfolds.