And yes…it has taken me entirely too long to write another post. Can you believe it?! It feels like the longest winter ever but pitchers and catchers report to Spring Training in less than a week! So today my friends, let’s finally flashback to my All-Star Week experience.

As I write this, the sheer gravity of not only the indescribable experience from this past week but also the many days, months, seasons, and years following that day in April that lead up to All-Star Week, makes me shed a tear. Being a fan of baseball, especially of the Cardiac Nats, isn’t easy. But I am truly grateful for what I experienced in those few days. It is still very surreal to have it happen right here…in DC! And I was a part of it!

Here’s how it went down:

As a member of NATS Plus, I was invited to a VIP preview of the All-Star Geico FanFest before it opened to the public the next day. I took my good friend Stephanie with me. Unfortunately, during this preview we were not able to see all of the exhibits FanFest had to offer, including the All-Star merchandise store, or even take part in the interactive games. See we were asked to wear business casual attire to this event. But who’s sliding as they try to steal a base or take repeated swings in the cage during the Home Run Derby VR…in slacks?!

OMG! I thought the Nationals WinterFest was a big deal. No no no! The All-Star FanFest… at full throttle…is on another level! More frenetic energy, way more people, and more 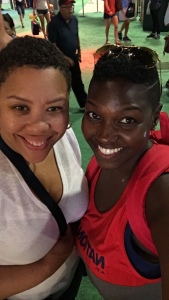 things to see, do…oh and buy! It was a totally different experience than what we had on Thursday night. And I completely lost my mind! Stephanie is a truly “ride or die” friend as she tagged along for an upwards of 6 hours with me as I walked down every aisle, checked in at every exhibit or station, stopped to take pictures, etc.

Listen…I knew it would be kinda hard to get back to FanFest before it was over so I made every minute count.

I met Tim Parks, Founder of the MLB Ballparks Pass-Ports, and I even scored pass-ports for all of my Nats games and Spring Training games. One of my goals this year will be to visit more ballparks and these babies will go a long way to helping me achieve and document those experiences. 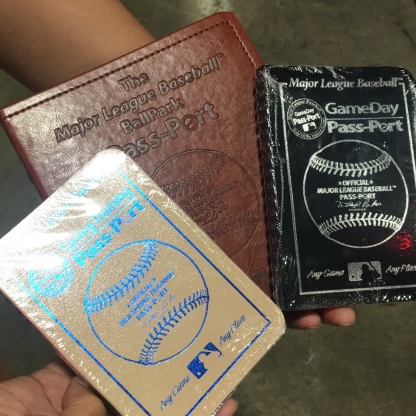 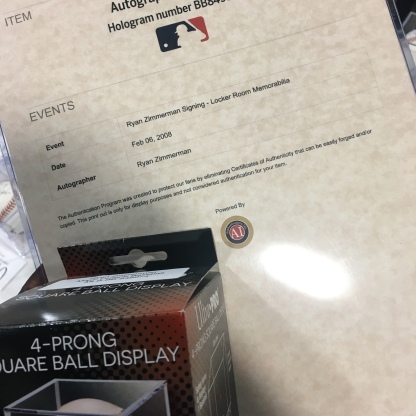 I also picked up a Ryan Zimmerman-signed ball and took a picture with the World Series Championship trophy (during the preview and glad I did, the line to get close to it was out of control that weekend).

Before leaving, I checked out the All Star Store and that’s when thing got a little out of hand. I left out of there with lighter pockets but I added a few new hats, a couple of shirts, and of course a customized National League jersey. Who doesn’t love new baseball swag?!

My half season plan doesn’t normally include Sunday games, so this was a treat. The Futures Game was a contest between the USA and the World teams. The World team, lead by David “Big Papi” Ortiz, was represented by Mexico, Cuba, Panama, Venezuela, Puerto Rico, Dominican Republic, South Africa, and Australia.  Five-time All-Star Torii Hunter lead the USA team. Each MLB team was represented and featured 16 players ranked among the top prospects in the minor league in 2018 being first-round, supplemental, or second-round draft picks.

Twenty-one year-old, Oakland A’s decent Jesus Luzardo was the starting pitcher for the World. Luzardo was actually part of a trade to the A’s in which the Nats acquired Sean Doolittle (Doooooooooo!) and Ryan Madson.  Mitch Keller, the 22 year-old Pittsburgh Pirates decent, started for the USA.

It was through observing this game and surveying the folks in the stands, that I realized…no…confirmed how truly magical baseball is. Baseball unites. Period.

Watching these young guys reminded me of how Bryce Harper looked when he first came on the scene. Hungry and like they were having fun. I couldn’t help but be excited for them and eager to see how they grow with the game.

Side note: I’m always amazed at how quickly the grounds crew can transform the field during a regular game and the transition from game to concert for the masses was no different.

Florida-Georgia Line performed “Cruise” and “Simple” before the Legends and Celebrity Softball Game. Did you know that band’s Brian Kelley was once a baseball hopeful? Yep and after that performance, he put on a National League jersey to play.

Now maybe I had never watched a celebrity softball game before because it wasn’t what I thought it would be…at all. Don’t get me wrong…it was fun to watch but after a while, I was wondering when the real game would start. Maybe my expectations were too high or simply unrealistic. If you’ve never watched one…well…it’s exactly how it sounds: celebrities “playing” softball.

Bill Nye struck out, John Wall tripled, a couple of Legends bombed…out, Shaquille O’Neal deejayed (right…who knew?!) and eventually entered the game for what I recall to be a terrible at bat, and The Miz surprisingly pitched well and won MVP, going 2-for-2 at bat.

The American League won 14-10 over the National League.

After the game, I followed my All-Star Week seat mate and fellow Nats fan to the MLB Assembly located at the pier at District Wharf. There we found this really cool pop-up featuring the artwork of local artists. We arrived just in time to catch the last of DJ Jazzy Jeff’s performance.

I can’t exactly remember how or what I was doing to miss it, but when I finally did arrive to the ballpark, workouts were over. Ground and camera crews were getting ready for the Home Run Derby. I readied my nerves. 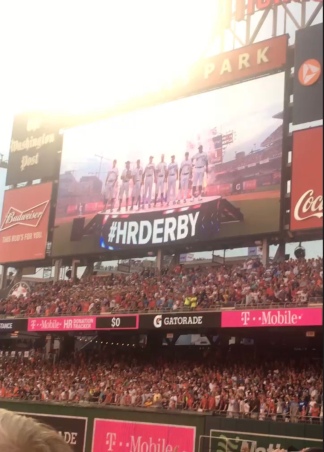 See the was a big deal for Nats fans and for DC. After his 2013 All-Star appearance and Home Run Derby lost to Yoenis Cespedes, Harper said he wouldn’t participate in the Home Run Derby again until it was in DC. Well here we were…FINALLY!

I barely recall many details but I do remember there being a lot of “boos” for anyone that wasn’t Bryce. We were so classy LOL.

The energy was contagious. Electric. Like a ripple through the stadium in the way The Wave would (when we used to do it). Out only focus was Bryce. The “Let’s Go Bryce!” throughout the park was so powerful, I remember pausing…in awe as it literally sounded like all 700k+ residents of DC were there at that very moment. So indescribable it was eerie.

Each round for me was an added layer of anxiety while trying to manage the midsummer heat and humidity. Both equally suffocating. 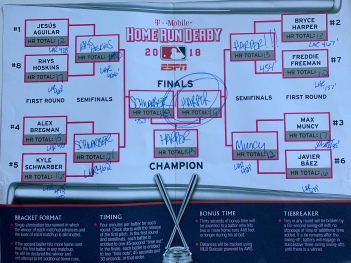 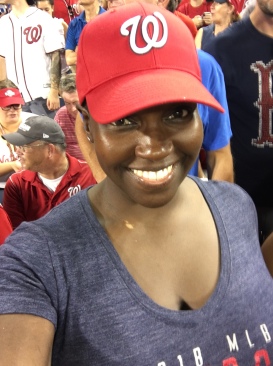 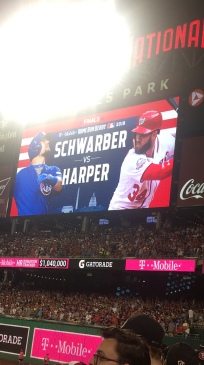 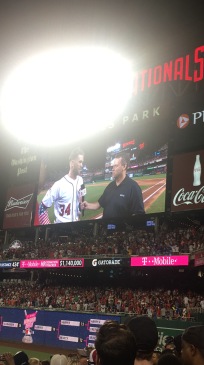 In the final round though, Bryce beat Kyle Schwarber 19-18. In all Bryce hit 44 home runs but the longest home run went to Javier Baez. And yeah…some that argued that Harper and his dad broke the rules in order to get that win. All I have to say to that is…debate me. WHAT A NIGHT!

Despite a lackluster first half of the season, after this, Bryce had a solid performance during the second half. I’d be remised if I didn’t mention how unfortunate it is that we Nats fans find ourselves still wondering where he’s going just a week before Spring Training starts.

This was it! The 89th Annual Midsummer Classic in what was then my new home, Washington DC. I should have been exhausted but I wasn’t. It was like the build-up of all of the emotions. The climax of the week’s events or even the seasons between April 6, 2015 to July 17, 2018 with 43,843 people in attendance. It was quite the mind-blowing 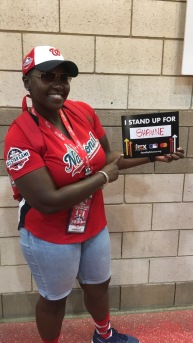 experience. The pre-game ceremony was a tribute, narrated by Bradley Cooper, to servicemen receiving the Medal of Honor. Talk about emotional and it never seems like enough for all our servicemen and women do.

The line up was escorted by The starting pitcher for the National League was our very own Max Scherzer (seriously, have you seen this guys record?!) and Chris Sale for the American League. Harper played center field. Now I’m a National League girl all day…but I must say that it was pretty cool to watch Judge, Trout, Yelich, and Betts, play in one place. It was then that my crush on the ‘Stros’s Alex Bregman (and All-Star Game MVP) began. I mean…have you seen his dugout stares? Anyway, American League won 8-6 after 10 innings.

Truth be told, the only thing that could top this experience would be the Nationals actually winning a NL Championship and making (baby steps) a World Series appearance.