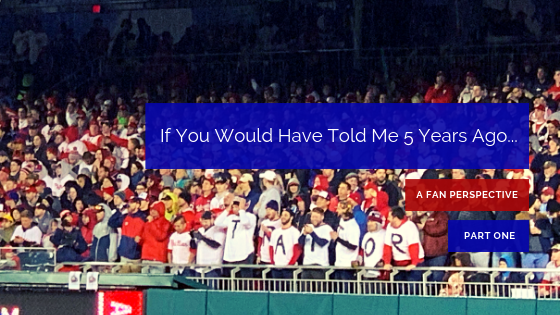 If you would have told me 5 years ago I would be walking into Nationals Park as an opposing player, I would’ve told you that you were crazy. Five years later, I’m doing just that. I remember the first day I walked into Nats Park. My first base hit. My first home run. And, of course, my first standing ovation. Nationals fans delivered that first ovation. The things that I will miss most are the relationships I gained on a personal level with so many of the Nationals staff and workers around the ballpark. Every day I walked in, I got a smile or shared a laugh with you. I especially want to thank The Lerner Family and Mike Rizzo for the unwavering support they showed me during my tenure in DC. The city of DC was home. Filomena’s, The Silver Diner, The Italian store, and countless other places helped make it feel like home. You, Nationals fans, made me one of your own for the entire time I was a part of the Nationals organization. I’m so blessed to have been able to play for a fan base that cared so much about our team each and every night. You will always hold a special place in my heart no matter what. I look forward to continuing Harpers Heroes with LLS in the DMV as well as making sure the legacy fields bearing my name are the best youth fields in town! When I run on the field tonight I am sure to hear some boos, but I will always remember the cheers and the screams that are still with me right now, as I start my new chapter. So for that, DC, THANK YOU.

We’ll come back to this.

The day before, on April Fool’s Day, I noticed an Instagram post by both Bryce and his wife Kayla, announcing that they would be expecting. Congrats to the parents-to-be! That was my initial reaction, but then I thought whether this was the first of many things to come in order to invoke empathy from disappointed Nationals Fans before we would face the Phillies and Bryce on April 2nd. Of course I could have totally read into that but the timing seemed oh so…well…convenient?

On that same day, an article came out detailing why Bryce is no longer a National. To note, the Lerner’s (owners of the Nationals) first offer to Bryce was for $300 m/10 years with deferred payments until 2052, made in 2018 during a damn rain delay. Wait, is this how it’s normally done?! Silence. Still Bryce was apparently excited and hopeful he’d remain a National when he met with the owners in December. Sometime went by and no one said anything again until January, when the Lerners extended yet another offer, but this time for less and with payments deferred 20 more years than the first offer. Well we know how that ended. You can read all about that elsewhere. We could also speculate why the Lerner’s did what they did but we won’t get into that right now either.

For a moment, I felt bad for Bryce. According to the article, he wanted to stay in DC. But Bryce was going to test his free agency, also.

I read the post. In its entirety and full disclosure, it made me shed a little tear. Not because he was gone and I longed to have him back. Not even because he’s a Philly now. I cried because after all of the time that had elapsed…that’s all we got. I was so disappointed. Beyond disappointed really. Maybe I wasn’t managing my expectations but that post came just before he made his return to Nationals Park in a different uniform…seriously it was the day he was returning.

It was literally too little…too late.

Here’s a timeline for context:

He could have gotten in front of this months ago! There was plenty of opportunity to address us Nats fans…even if the language was something along the lines of, “I don’t know what the future holds but…” Does Bryce Harper not have a PR person?!

To be clear, there were levels to how Nats fans felt about this whole situation. Some stopped caring for the guy a long time ago, some destroyed their jerseys, some hated him for going to Philly, some immediately wished him the best. For me, it was never that he signed elsewhere, and after a while I had pretty much moved passed the fact that he was now in Philly (our division rival). But this thank you/walk down memory lane/ode to DC felt rushed, inauthentic, definitely half-assed, and did nothing but slap us on the other cheek.

I was there the year he made his MLB debut. I, along with thousands of other people, flocked to the ballpark with excitement to see this young prodigy and hopes of witnessing him hit a home run then flip his bat like a boss. Bryce had so many good times and some bad through the years. And us fans were there through it all.

So, if you would have told me 5 years ago…

…that Bryce not only wouldn’t be a National, but would end up 4 hour drive NE to our division rival…

…that he would come to be an immediate turncoat, declaring love for a city whose fans disrespected him year after year, and go on to unnecessarily spell words with “Ph” like “Phamily”…

…that the day would come when his first fan base, the only fan base he knew would feel betrayed and then non-existent…

…that I’d come to witness what seemed like all of the DMV root for him during the Home Run Derby, all to be given an 11th hour thank you later…

I would have told you that you were crazy.

But here we are.

So for that, Bryce, no thank you!